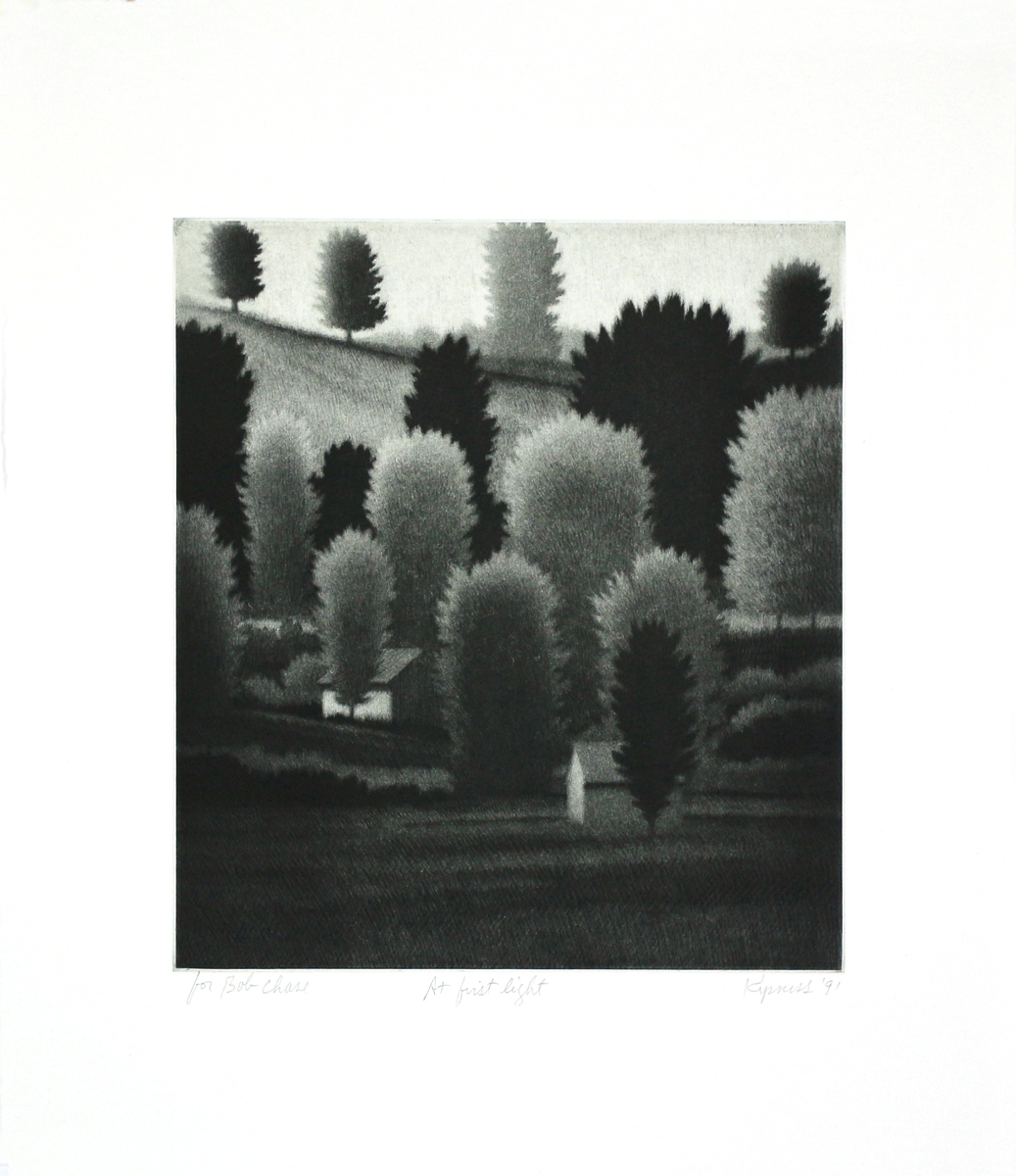 "The elements that remain a large part of my imagery... mysterious windowless houses, backyard fences, trees leafless in the off-season… My work remains unpopulated because I can then become as if the lone inhabitant, and when the work leaves my hands, who stands before it becomes for a moment me, alone, there."

Robert Kipniss (born Brooklyn, New York, February 1, 1931) is an American painter and printmaker. His paintings, lithographs and mezzotints share stylistic characteristics and subject matter and typically depict trees, landscapes and some interiors, frequently with a landscape beyond. No human figures are present, and all forms are reduced to essentials. Kipniss' use of exceptionally subtle tones and hues creates an overall atmospheric effect. His works have been described as conveying solitude and inward experience.

Kipniss studied at the Art Students League in 1947, Wittenberg University in Springfield, Ohio from 1948-50, and the University of Iowa, receiving a BA degree in English literature in 1952, and an MFA in painting and art history in 1954. Although he has painted in oil throughout his life, Kipniss focused on stone lithography during his early career, and has predominantly worked in Mezzotint since the early 1990’s.

Considered one of the greatest living American printmakers, with a professional career that spans seven decades and work that can be found in over 170 museums including The Metropolitan Museum of Art, New York; The Whitney Museum of American Art, New York; Butler Institute of American Art, Youngstown, OH; The British Museum, London; the Albertina, Vienna; the Bibliothèque Nationale de France, Paris; the Royal Society of Painter-Printmakers, London; The Pinakothek der Moderne, Munich, Germany; the Los Angeles County Museum of Art; The Museum of Fine Arts, Boston; Smithsonian American Art Museum, Washington, DC; and the Art Institute of Chicago.

Kipniss was elected to the National Academy of Design in 1980, and to the Royal Society of Painter-Printmakers, London, in 1998. He has received a Lifetime Achievement Award from the Society of American Graphic Artists and The Artists Fellowship. He has also received the Speicher-Hassam Purchase Award from the American Academy of Arts & Letters, as well as Honorary Doctorates from Wittenberg University and Illinois College.

Kipniss's first lithographs were done in black and white, but by 1970 he was also working in color. He taught himself to lay in delicate light silvery tones on the surface of the limestone by maintaining an exceptionally sharp point on the lithographic pencil and drawing with no pressure other than the weight of the pencil itself. The delicate hues of his prints are of such extraordinary subtlety that it is only on careful examination that the viewer can recognize how complex they are, requiring as many as eight different plates to produce a single print. By 1990 Kipniss had completed about 450 editions of lithographs.

Kipniss stopped producing lithographs in the early 90s and began to work solely in the  mezzotint medium. Mezzotint is an intaglio printmaking technique along with etching and drypoint, in which the artist begins with a rocked copper plate. If the plate were to be inked and printed at the initial stages, it would register to the paper as carbon black. To draw out the lightness in the image, the artist must carefully scrape and burnish away the copper plate’s ability to hold ink. This process is exceedingly time consuming, but results in a range of tonality. Over time, he sought narrower ranges of mid-tones while still bringing out the rich dark characteristics of the mezzotint. Kipniss, who is still actively producing Mezzotints, is considered a true master of the technique.

“I may be painting trees and houses, but when I look at them, that’s not what I see. I see an atmosphere, a moment, a quickly passing experience that I’m trying to capture. My art is an art of intensity, of delving, of exploring the soul.”

"One thing I have most wonderfully learned is that the greatest reward for making art is making art. The life of an artist is about the art. In the beginning, getting a career started was very challenging, mostly because there was no sure way to do it, no rules, no guideposts; it was with trial and error that I gradually became established. Instinctively I knew that painting and exhibiting were the only essentials I needed, and whatever difficulties I encountered along my path, there was always the reassurance of working and learning.

My first one-artist show was in a 57th Street gallery in 1951, which was then the heart of the New York art world. Exhibiting and success are not the same and this first show made a very modest ripple. I was working and showing right from the start, and it never occurred to me to wonder if I would be successful or not. I was working and had become a small part of the art world. Life was good.

From just before I began regarding painting as a serious life pursuit I had started writing with the conviction I would spend my life as a poet and a fiction writer. A year later I realized that while I had enjoyed painting as a past-time it would now share my desire to write as the focus of my energies for the rest of my life.

For about ten years my painting was lyrical, energetic, filled with bright color and charged with exuberance. At the same time my writing was dark, angry, at times a bit surreal, and often painful to create. When I stopped writing for a while in the early 1960s my paintings took on the characteristics of my former writing, and became infused with anger, a dark monochromatic palette, and occasionally slightly surreal themes: the added gravitas became immediately apparent. It was only a few years after this that my inner lyricism began to re-surface and meld with the darkness; this was the beginning of my mature style. Unexpectedly, my career took off. I have lived my life as I dreamed of doing as a young man."

Inquiry About At First Light