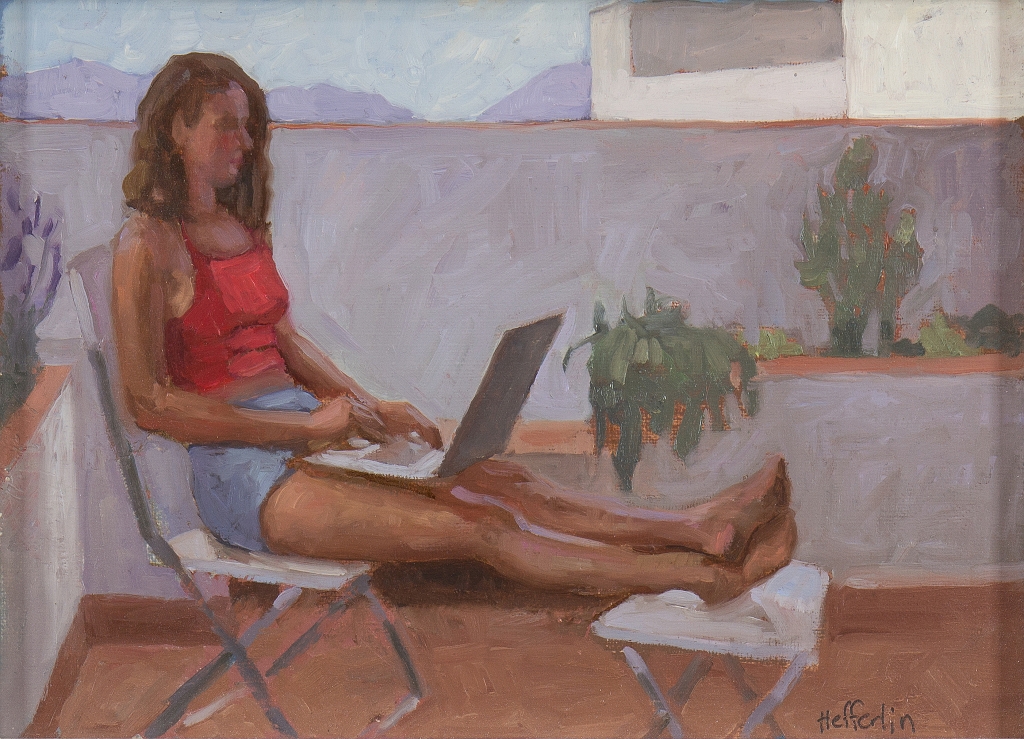 She Loved Working on the Roof

An American painter, born in the 60's
Russian and American trained in Realism.

Melisssa Hefferlin’s foray into the world of Fine Art began at a young age when she studied violin.  Moving to Russia with her parents as a preteen (from ages 10 thru 13) cemented her devotion to the arts as she used her new found independence via public transit to explore Russia itself through travel, museums, and cultural sights. High school saw her return to America, but Russia was in her blood.  At age 20, she spent her junior year of college abroad, studying at the elite Russian School of Art where a Bachelor of Fine Arts was composed of twice as many studio credit hours versus the similar degree in the West.  Her passion for a high-level atelier meant she was only the second American to ever gain entry to study at the Russian School of Art… the first was none other than America’s own James Abbott McNeill Whistler!

During this time of study, figurative work was the predominant subject, and her comfort with that genre is seen in her many portraits and figurative studies in ink wash.  The idea of still life followed later and is now a substantial and significant avenue in her oeuvre. Her current series of still life creations were heavily influenced by a three-day trip to Venice last year to celebrate her husband’s birthday (acclaimed Russian Master, Daud Akhriev).  These originals emanate from the perfect setting for an artist.  Lit by the Spanish sun via a skylight installed by her devoted Daud, these paintings are illuminated and influenced by a far reaching and arching beam of natural light which travels throughout the course of the day circuitously around her studio.   There is a ledge set into one of those pale white washed walls upon which Melissa assembles her beloved treasure horde into the compositional excellence of her paintings.  These objects repeat themselves in a singular fascination for those who love playfulness and a good story. These little pieces of pleasure are, for Melissa, part of her days in the studio.  They move, change, and manifest the memories of the moments they were joyfully acquired ...the studio is an intricate part of their beautiful life in Spain.

Melissa, during a delightful and invigorating recent video call with all of our Art Consultants, discussed in depth and detail many stories and deep emotions behind these new works.  She made sure that we understood she is not always or immediately aware of the painting’s message, but instead waits for the story to be told as presented by the assemblage of treasured inanimate friends. We loved it!  These previously unknown aspects as related by Melissa are carried by vivid memories for art collectors thirsting for that painting which seems to be … “exactly what I’m looking for!”

Melissa is a member of Oil Painters of America, the Union of Russian Artists St. Petersburg Russia, and the Association of Pastel Painters of Spain. She is a Signature member of Pastel Society of America. She’s won awards for excellence at NYC’s Salmagundi Club, Pastel Society of America, Salon International, Association of Women Artists, and many others. Her work has been published widely, including Artists Magazine and American Art Collector Magazine. Hefferlin has exhibited in New York, Los Angeles, Denver, London, Zurich, and throughout the Southeastern United States. In 1999, she co-authored a coffee table book about Russian painting titled “Traditions Rediscovered, the Finley Collection of Russian Art,” and in February 2002, the Hunter Museum of American Art presented a solo show of her work. Her art hangs in the Hunter Museum of American Art, the Semens Corporation art collection, the museum of the Russian Academy of Art and Southern University to name a few.

Hefferlin’s preferred media are oil painting, pastel painting, ink wash and relief printing. She teaches workshops around the Southeastern United States and in Spain. She speaks English, Russian and Spanish. She now spends her time in Andalusia, Spain and Tennessee, USA with her artist husband, Daud Akhriev.

“It’s part of my life’s philosophy that order can be made, can be perceived, and in 16 by 20 inches I can make something orderly and, to me, beautiful. It is like an act of meditation, and very soothing to me.” - Melissa Hefferlin

Inquiry About She Loved Working on the Roof