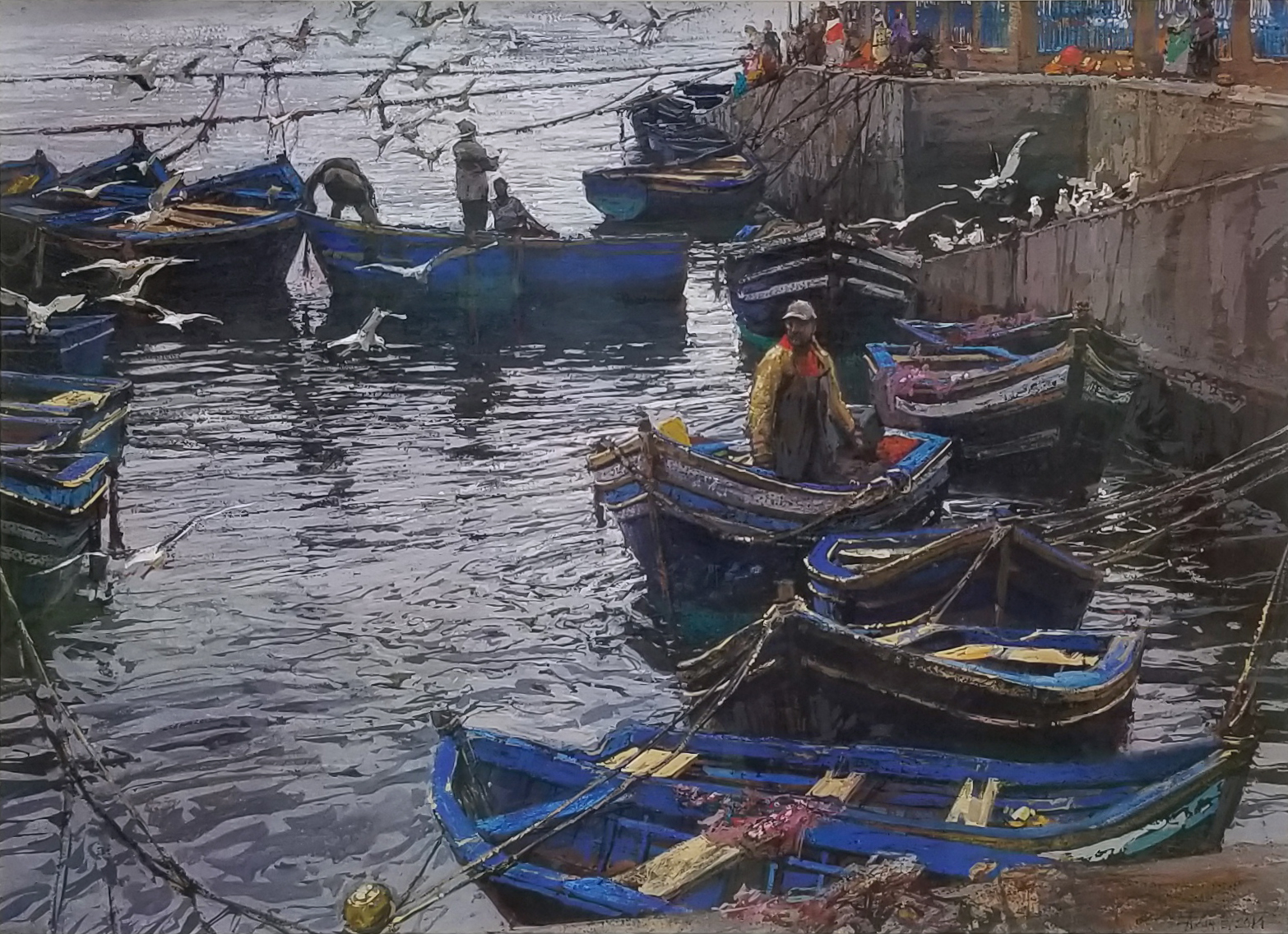 Gulls join fishermen as both Return to Harbor, regaling each other with their catches from the sea.  Daud Akhriev demonstrates his brilliance in various mediums, this time in tempera*.  The fragility of the medium is bellied by the robustness of the harbor walls, and the people who inhabit them daily.  Daud’s strong lines and precise application of pigments add further strength to an original painting in a size suitable for myriad placements. Works such as Return to Harbor so elegantly created not only record history of place and time but represent the sheer celebration of the world of fine art itself.  With every nuance and with all of its light and shadowy areas a story is told  to perfection.

Daud Akhriev was born in the former Soviet Union in 1959.  He studied classical painting and drawing for 14 years, graduating with honors from the Repin Institute (Russian Academy of Fine Art) with a masters degree in fine art, under the tutelage of the late painter and Academic, Piotr Fomin.  In 1991 he emigrated to Chattanooga, Tennessee.  Akhriev, now a U.S. citizen, shares his time between Andalusia, Spain and Chattanooga, Tennessee with his artist wife.

Akhriev is internationally sought after as an instructor for figure and landscape painting and for his monumental work. The Four Seasons, his four 9 foot bronze figures completed for the city of Chattanooga, are listed on the national Public Art Registry. Additional public art includes the Erlanger Chapel Mosaic and the Baylor School Mosaic, as well as murals at the Collegedale Seventh-Day Adventist Church and St. Peter's Episcopal.

Daud Akhriev, Stylistic Pluralism was published in 2002 by Common Place publishing.  He is also featured in Traditions Rediscovered, the Finley Collection of Russian Art.  Akhriev’s drawings are in several books about the Repin Institute, both in Russian language and in Chinese, and in numerous magazines such as Artists Magazine, Pastel Journal,  Island Journal, Chattanooga Magazine, Southern Living and American Art Collector.

"Akhriev's dedication to detail is exquisite to the point of being other-worldly."
- Jennifer Jordan, author and filmmaker, Salt Lake City

“… You could also say that the artist’s subject is light: we can almost feel the heat of the sun. We nearly squint at its intensity.”
-Tamera Lenz Muente, Assistant Curator, Cincinnati Museum of Art, in Pastel Journal

“…artist, Daud Akhriev, captures in his paintings and pastels the contradictions and hardships of Maine coastal living in a collection of powerful and compelling images. …Akhriev’s waterfront scenes are complex and meticulous studies in color and form—a gigantic game of Pick-Up-Sticks, gone array. In each of his works, the docks, like the island inhabitants he portrays, appear to have reached an uneasy truce with a world where the power of nature is relentless and the flesh endures against all odds.”
-Critic Richard Friswell - ARTESMAGAZINE

Inquiry About Return to Harbor