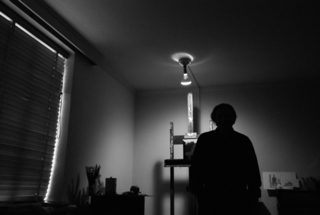 Artists are asked to write statements about their work throughout their careers, and I must say writing such a statement as I turn 85 is very different than when I was 45, 55, or 65.

One thing I have most wonderfully learned is that the greatest reward for making art is making art. The life of an artist is about the art.

In the beginning, getting a career started was very challenging, mostly because there was no sure way to do it, no rules, no guideposts; it was with trial and error that I gradually became established. Instinctively I knew that painting and exhibiting were the only essentials I needed, and whatever difficulties I encountered along my path, there was always the reassurance of working and learning.

My first one-artist show was in a 57th Street gallery in 1951, which was then the heart of the New York art world. Exhibiting and success are not the same and this first show made a very modest ripple. I was working and showing right from the start, and it never occurred to me to wonder if I would be successful or not. I was working and had become a small part of the art world. Life was good.

From just before I began regarding painting as a serious life pursuit I had started writing with the conviction I would spend my life as a poet and a fiction writer. A year later I realized that while I had enjoyed painting as a past-time it would now share my desire to write as the focus of my energies for the rest of my life.

For about ten years my painting was lyrical, energetic, filled with bright color and charged with exuberance. At the same time my writing was dark, angry, at times a bit surreal, and often painful to create. When I stopped writing for a while in the early 1960s my paintings took on the characteristics of my former writing, and became infused with anger, a dark monochromatic palette, and occasionally slightly surreal themes: the added gravitas became immediately apparent. It was only a few years after this that my inner lyricism began to re-surface and meld with the darkness; this was the beginning of my mature style. Unexpectedly, my career took off.

I have lived my life as I dreamed of doing as a young man.

The Whispering Light at FWMoA

Joel and Lila Harnett Museum of Art
University of Richmond, Virginia
"Sense of Place: Landscapes from the Permanent Collection"
includes Kipniss mezotint plates, prints and drawings
March through May 2015