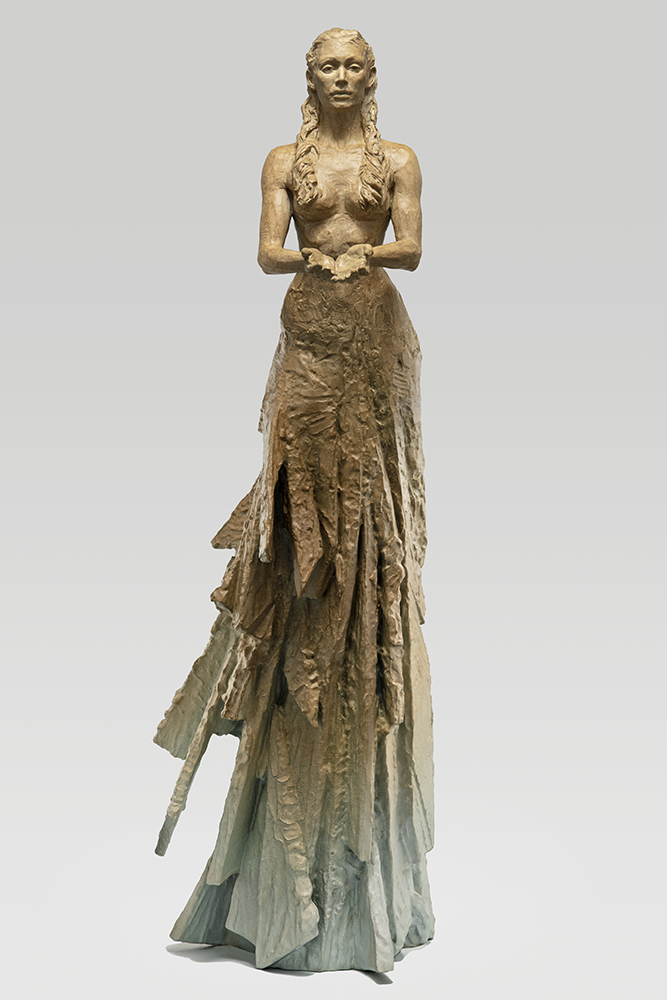 A figure, reminiscent of iconic Greco-Roman sculpture, is brought to a never-before-seen modern interpretation in this stunning and beautifully finished bronze.  Rising as if from the bedrock, the lines of the figure’s garment in an elegant abstract realism progressively melds into a potent and solid form. This temporal being appears in supplication, surrendering heart and spirit via cupped hands inviting connection and purpose. It is this pure surrender in bronze which we find so intriguing… a remarkable creation for the ages from a Master Sculptor.

“Here she is standing in Surrender of all those facades that no longer serve her. She has finally found the essence of her purpose. The connection becomes the only aim.  Empathizing with the struggle to be open and true, she offers forth her hands in love and appreciation. She offers you the cup of her heart for you to hold, to fill, and perhaps to surrender your own cup of devotion.   ~  Paige Bradley

Born in Carmel, California Paige Bradley knew she would be an artist by the age of nine. Immersed in nature and art, Bradley’s fascination with the human figure began early. She believed that through the figure an artist could speak a universal language that is timeless and essential. Paige began drawing from the nude model by the age of ten and by fifteen was studying intensely at university campuses during the summer months. Knowing that she was naturally a sculptor, at seventeen she cast her first bronze.

Educated at Pepperdine University, Paige spent a year in Florence, Italy with the university’s study program. There she took classes at the Florence Academy of Art, which included art history. She went on to continue her education at the prestigious Pennsylvania Academy of Fine Arts, where she studied sculpture and learned to paint and print in several different mediums.

In 1995 Paige was assistant sculptor on a monument for the Atlanta Olympic Games. In 2001 she was voted into the National Sculpture Society, the Catherine Lorillard Wolfe Art Club and The Salmagundi Club as a professional sculptor. By 2006, her work was featured in over a dozen galleries, teaching masters workshops and being sought out for public and private commissions. At thirty years old, she already had a strong following of international collectors.

Paige’s work is full of dichotomies: both the beautiful and the ugly, the liberated and the contained, the falling and the floating. She is always in control of form but not imprisoned by its literality. The subject matter becomes the most important – not narrowly feminist, but rather humanistic betrayals of modern emotion. Paige’s work is becoming a valuable keystone for the missing figure in contemporary art. In 2014 Paige exhibited over forty sculptures, several new drawings, and a signed catalog of works at a major U.S. exhibition. It was her way of celebrating twenty years in sculpture, which most likely is just the beginning.

"Inspiration comes from my connection to the world, my relationships with others, and my relationship with myself. I don’t need to travel the planet or hire dancers to find a muse. My individual journey is inspiration enough. Since I was nine years old I knew I would be an artist. I was drawing since I can remember and began casting my work into bronze when I was seventeen. Three decades later, I am still doing it – and I intend to never stop. As much as I try to avoid labeling myself, I am a figurative artist in everything I do. The figure to me is the perfect vehicle to communicate the human condition. My definition of success is to be a visionary through truthful and courageous artwork, work that communicates what it feels like to be alive in the world today. I keep moving my work forward by questioning, observing, looking for truth and searching for clarity. My goal is to have the courage to create what feels real, not necessarily beautiful, in order to create lasting, fine art."

Inquiry About The Surrender Cup