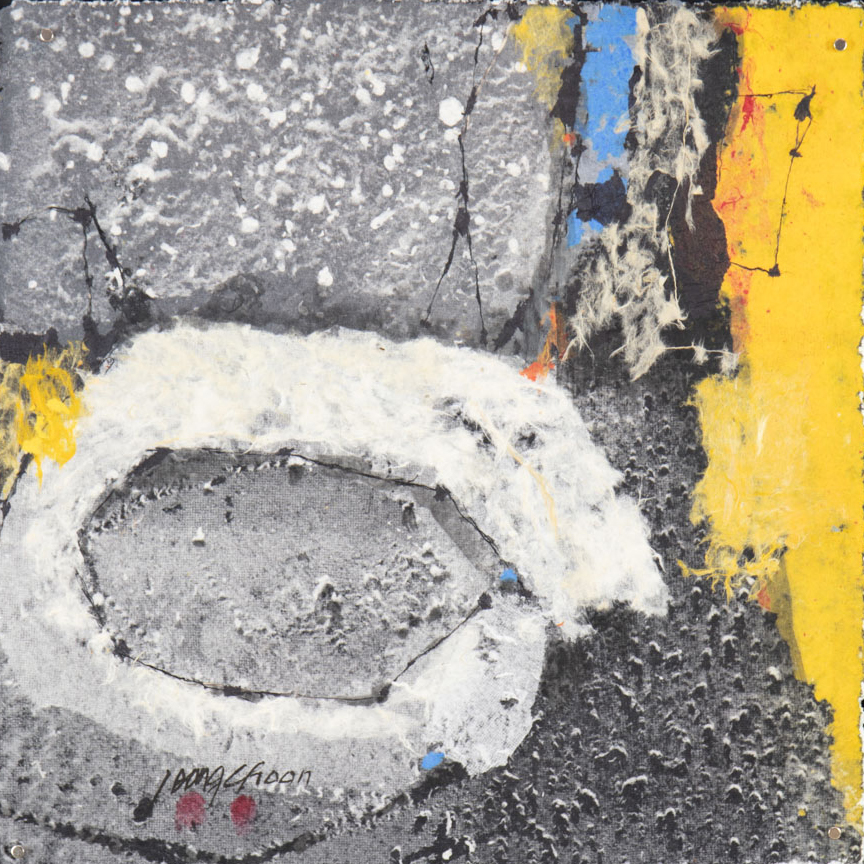 The Yuns have created, in their works, a unique alchemy of ancient Asian techniques and more modern Western imagery, specifically abstraction. Their paintings are made in the traditional method of Hanji, Korean paper-making, which they utilize in both time-honored and non-traditional ways. The origins of Hanji traces back almost 2,000 years. It is believed that paper was invented by T'sai Lun in 105 BC in China. Papermaking skills were passed on to Korea and from there were carried on to Japan. Hanji is made from young-year-old bark of the dac, or mulberry tree. The bark is carefully harvested each year between November and February. The bark regenerates each year. The Yuns commitment to their craft demands that they do this collection themselves. They pay farmers in South Korea to keep forests of dac intact and visit the orchards each year for their gathering. They then begin a meticulous and arduous progression of steaming and processing the pulp. When they have finished to their satisfaction, they ship the product to the United States, where they now live. It is a totally organic result, all-natural.

Some of the prepared dac pulp will be put into smaller containers and blended with ground natural pigments, one for each color which may be used in their final creations. The Yuns are gifted master paper-makers. They make molded screens for the initial paper-making with the non-pigmented pulp. When dry, this hand-made paper acts as the substrate for their works. They then utilize the containers of pigmented pulp to make designs, as they create layers, in varying thicknesses. They may also use a collage technique and will layer in other artistic innovations they have made, such as etchings and lithographs and monotypes. It is a laborious, yet joyful, process of creation, demanding supreme patience and confidence.

The Yuns are a married couple, who have chosen to work together. Each of them was educated in South Korea and received BFA's at Kemyung University, in Daegwoo, with majors in Western art. This education has informed the direction of their artwork profoundly. Mr. Yun, Jeonghan, went on to receive his MFA and became a professor at his alma mater for many years. After graduation, and while Mr. Yun was teaching, each of them pursued their individual art careers, to great acclaim and recognition, in their homeland and abroad. When their two sons decided to come to the U.S. to further their studies their parents immigrated to the United States as well to be close to their family. Jeonghan received a second MFA at the Academy of Arts University in San Francisco, with an emphasis in Printmaking.

The Yuns made a monumental decision several years ago. They determined that, with differing sensibilities and visions, they could create works as a team differently than what they did individually. Indeed the results of these collaborative efforts are remarkable, moving and unique. They sign each work with both of their names and add in each of their thumbprints, which has been dipped into pigment, to signify their approval of each completed masterpiece. They have explained that their creations are timeless and extraordinarily durable. Examples of Hanji dating back to the Sixth Century have been excavated in wonderful condition. They are, for want of a better term, like paper tapestries. They title their works very generically, with a numbering system known to them, and with designations like Paper Play or Zen, or Dac-tree Recollection. They are meant to be framed and exhibited without glass so that light can saturate the paintings, and not have a reflection. A specialized mounting system, employing magnets, has been devised to show their spectacular works.