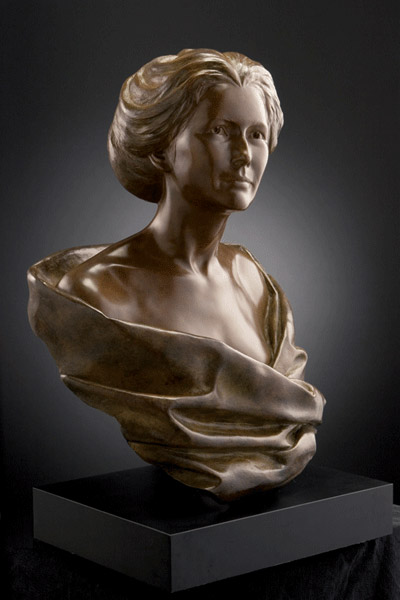 "I believe that art has a moral responsibility, that it must pursue something higher than itself. Art must be a part of life. It must exist in the domain of the common man. It must be an enriching, ennobling and vital partner in the public pursuit of civilization. It should be a majestic presence in everyday life just as it was in the past.

These are the words of Frederick Hart who has been described as America's greatest representational artist. "My work isn't art for art's sake, it's about life. I have no patience with obscure or unintelligible art - I want to be understood."

Born in Atlanta, in 1967 he began working at the Washington National Cathedral as an aspiring artist working with Italian stone carvers. "The Cathedral became a magical place for me, a place outside of this century. The wonderful Italian stone carvers who worked there were the last of a generation, a link back to the major American architectural works of the early 1900's, to buildings like the Supreme Court, the Federal Triangle, and Grand Central Station, as well as to the great American sculptors Augustus Saint-Gaudens and Daniel Chester French."

In 1971 he began sculpting in his own unheated studio, "almost starving to death" as he sketched his ideas for the Cathedral international competition to commission the design for a series of "creation" sculptures for its main facade, Hart remembers, "It was to be a contemporary idea of Creation, a vision of an unfolding universe." Inspired by Pierre Tellhard de Chardin's writings on science and theology, Hart envisioned a great allegorical work which would evoke the heroic struggle for awakening and consciousness. The selection committee for the Cathedral was impressed with the power and vision of his scale model studies and in 1974 awarded him the project. He was thirty-one.

In the year 1985 President Regan honored Hart with a prestigious and influential role by appointing him to a five-year term on the Commission of Fine Art. The Creation Sculptures were completed in 1990, almost twenty years after Hart began designing them and he went on to create the statue of "Three Soldiers" for the Vietnam Veterans Memorial in the nation's capitol. In 1993 he was distinguished with an honorary degree of Doctor of Fine Arts from the University of South Carolina.

Frederick Hart's legacy is diverse and wide spread, throughout his career he worked in stone, bronze, marble and pioneered the use of acrylics in figurative sculpture, a technique he called "sculpting with light". He was an inventive revolutionary; his works are physical and sensuous, yet spiritual; direct, graceful and subtle. He is survived by Lindy Hart and they are the parents of two sons, Lain and Alexander. --And he is survived by his art which lives on, spreading ethereal, vibrant beauty throughout the world.